Carole Lombard (née Jane Alice Peters) is very often forgotten today, but in 1930s she was a star extraordinaire, the highest paid actress in Hollywood, and the queen of the screwball comedy. Already a seasoned veteran of noir and drama, she was Howard Hawks' choice to play the lead in Twentieth Century, his classic screwball comedy, and her status as a great comedian was assured. When she married Clark Gable in 1939, it seemed as though she was on top of the world, until her untimely death in a plane crash while promoting war bonds in 1942. But her star continues to shine in this five film series featuring some of the funniest performances you will ever see, from one of the greatest actresses ever to grace the silver screen.

TO BE OR NOT TO BE

Lombard's last film, and, some argue, her best. Paired with director Ernst Lubitsch, Lombard put in a performance of surprising complexity in this story of a Polish acting troupe trying to outwit the invading Nazis. Lombard and Jack Benny lead the troupe, and their work together is nothing short of brilliant. The complex plot and the comedic take on the Nazi threat may have turned off audiences, as the film wasn't a hit nor critically praised in its day, but is now regarded as a classic. 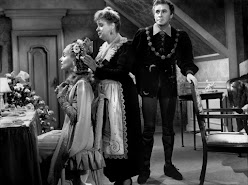