MEL BROOKS WILL NOT DIE!

Mel Brooks is turning 94 this year, and his energy seems to have no bounds. Born Melvyn Kaminsky in 1926, he knew at a young age he was going into show biz. In his long life, Brooks has been a tummler, drummer, stand up comedian, diffused land mines in World War II, and wrote for Sid Caesar before he and lifelong pal Carl Reiner hit gold with their 2,000-Year-Old Man routine, whose albums sold millions, not to mention creating the hit show Get Smart. But the movies beckoned, and with The Producers, Mel Brooks not only had a hit, but an Academy Award for Best Original Screenplay (years later, he'd win Tonys for the Broadway adaptation.) An astounding (and astoundingly crass) entertainer whose comedies never grow old, Mel Brooks will never die! At least in our hearts...

So controversial no studio wanted to touch it, Brooks' early masterpiece is a riot of song, dance, ridiculous dialogue and... Nazis. Failed producer Max Bialystock (Zero Mostel) wants to bilk oversexed old ladies out of millions by producing the surefire flop "Springtime for Hitler: A Gay Romp with Adolf and Eva at Berchtesgaden" with his nervous accountant Leo Bloom (Gene Wilder). But when the thing proves to be a hit, our heroes are in big trouble! Offensive and hilarious, The Producers was a hit for Brooks, who took home his one and only Academy Award for its screenplay.

BOTH OF THESE SCREENINGS ARE SOLD OUT

An outrageous comedy that sends up Westerns, politicians, racists, sex... you name it, Blazing Saddles skewers it. Through a series of complex mechanisms, Bart (Cleavon Little), a black sheriff, is set up to take a fall when a railroad baron wants to buy up an entire town. A stellar cast was supported by Brooks' incredible script (written with Richard Pryor), and became the biggest box office film of the year. Brooks said: "I wrote berserk, heartfelt stuff about white corruption and racism and Bible-thumping bigotry. Blazing Saddles just got everything out of me--all of my furor, my frenzy, my insanity, my love of life and hatred of death." 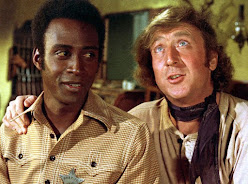 BOTH OF THESE SCREENINGS ARE SOLD OUT!

1974 proved to be Mel Brooks' finest year, when his two masterpieces, Blazing Saddles and Young Frankenstein, were the top and fourth-highest grossing films of the year. But Young Frankenstein is a rarity: filmed in gorgeous black-and-white, and featuring a cast that could nimbly jump between comedy and pathos, Brooks' great send-up of Universal horror films is also a touching motion picture. Gene Wilder and Peter Boyle are perfect as master and monster, and Marty Feldman, Cloris Leachman, and Teri Garr helping round out a brilliant cast.