Born in Queens during the big war and raised in Manhattan's Little Italy in a devoutly Catholic home, Martin Scorsese grew up escaping his tough environments in the cinema. Considered America's greatest living director, Scorsese's films, gangster and otherwise, are violent, often humorous, and profound examinations not just of the hard people who grew up around him, but are personal examinations of faith what it means to be fully alive. The Heights and Trylon Roadshow present five of Martin Scorsese's most thrilling and sublime films.

If you purchased tickets to the originally scheduled May 28th screening of RAGING BULL, this screening has moved to Thursday August 20th.

When people think of boxing films, no other movie comes to mind before Raging Bull. With this brutal tale of boxer Jake LaMotta and his rise and fall, Scorsese doesn't shy away from the violence inherent in the sport both in and out of the ring. Gorgeously shot in black and white, and with De Niro's signature performance (and his losing and gaining weight not only became the stuff of legend but has inspired equally dedicated--or insane--actors to follow suit), Raging Bull is widely considered to be one of the greatest films ever made. 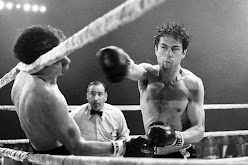