DOWN THE WORMHOLE: WARPED SCI-FI CLASSICS

Sci-fi can be fun, it can be crazy, it can be disturbing. What’s best is when it’s all three. From the minds of some of cinema’s most visionary directors comes five classic, bizarre science fiction films, from around the world and across the decades.

Kris Kelvin is a psychiatrist sent to an aging space station circling the ocean planet Solaris. Unbeknownst to him, the planet is a sentient being, capable of manipulating the scientists who are studying it. Based on Stanislaw Lem's mind-bending novel, and run through with Tarkovsky,s signature slow-cinema shots and fascination with memory, this one is really out there, but you won't soon forget it.

In Russian with English subtitles

Cooper (Matthew McConaughey) is a farmer and retired NASA astronaut. With Earth facing destruction, he works with fellow scientists to travel through a wormhole near Saturn in a desperate attempt at saving humanity. Christopher Nolan's mind-bending look at space- and time-travel is considered one of the most scientifically accurate films ever made, but its intense emotional heart is what resonates throughout this beautiful movie.

Fritz Lang's insane vision of the future took German expressionism and Le Corbusier's futuristic urban planning and created what is arguably cinema's first truly dystopian vision, an urban hellscape whose story, and gorgeous production design, inspired countless films for decades. The story of the clash of rich vs. poor in a city of the future resonated in post-war Germany, and stunned audiences around the world.

This screening features a new recording of a reconstruction of the original score by Gottfried Huppertz performed by Berlin's Rundfunk Symphony. 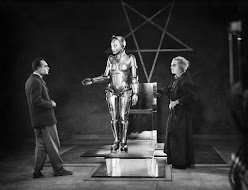 A somewhat epic failure in its day, Blade Runner has since gone on to become arguably the most influential science fiction film of the second half of the 20th Century. Deckard (Harrison Ford) is a blade runner, whose job is to kill replicants, bioengineered humanoids. When four replicants murder their way out of an off-world colony, Deckard has to hunt them down, and discovers shocking truths about them and himself. As much the work of special effects guru Douglas Trumbull as director Ridley Scott, Blade Runner boasts some of the finest work from Ford, Rutger Hauer, Sean Young, Edward James Olmos, and the score by Vangelis is hypnotizing. Watching this masterpiece in the Heights Theater will be an experience you won't soon forget.

Working with visionary author Arthur C. Clarke, Stanley Kubrick blew the world's mind with 2001: A Space Odyssey, considered by many to be one of the greatest films of all time. A strange black rectangle, the monolith, appears in pre-human times and helps apes discover tools... and violence: when it reappears on the moon in modern times, the monolith communicates the same messages to HAL, the artificial intelligence running the spacecraft. This special presentation is an "unrestored" 70mm print made from the original negative in 2018.